A couple of weeks ago I blogged about a new digital storytelling project I was working on in 5th Grade English. My students wrapped up their comics last week, and I wanted to share some of the results here. First, a few screenshots of their final projects, made using Comic Life. I was really impressed with how my students used a combination of hand drawn and printed backgrounds to achieve dimensionality and depth, and how some of them took advantage of Comic Life's thought bubbles to add complexity to their storytelling: 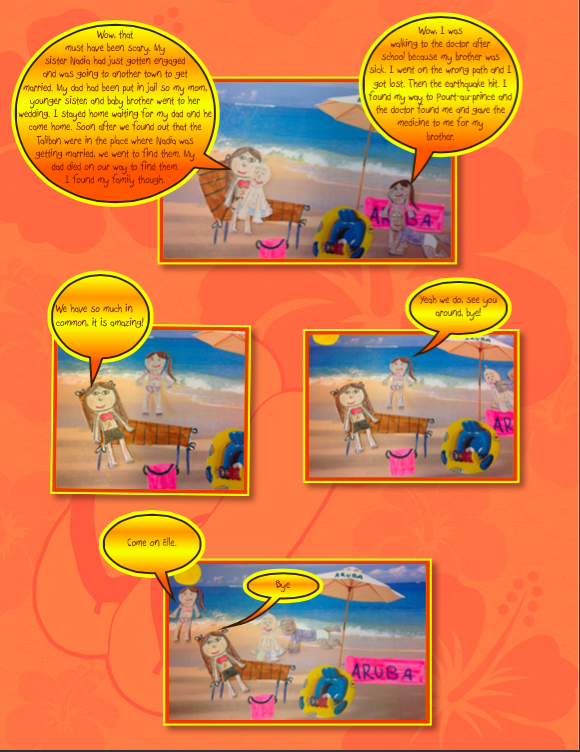 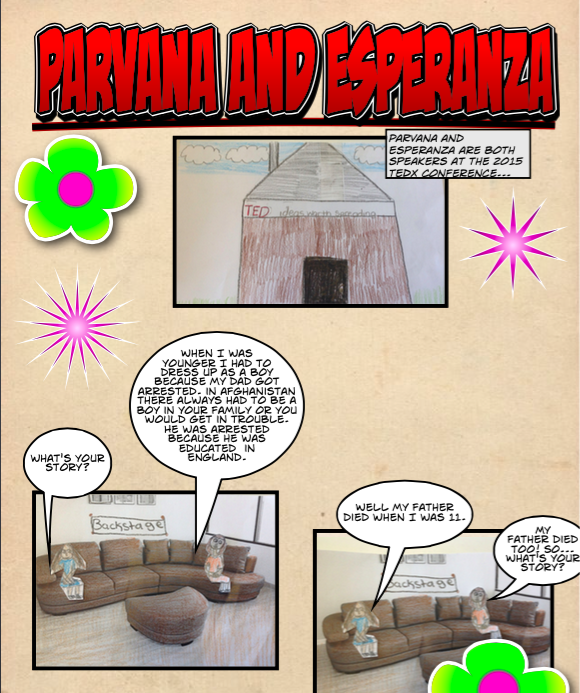 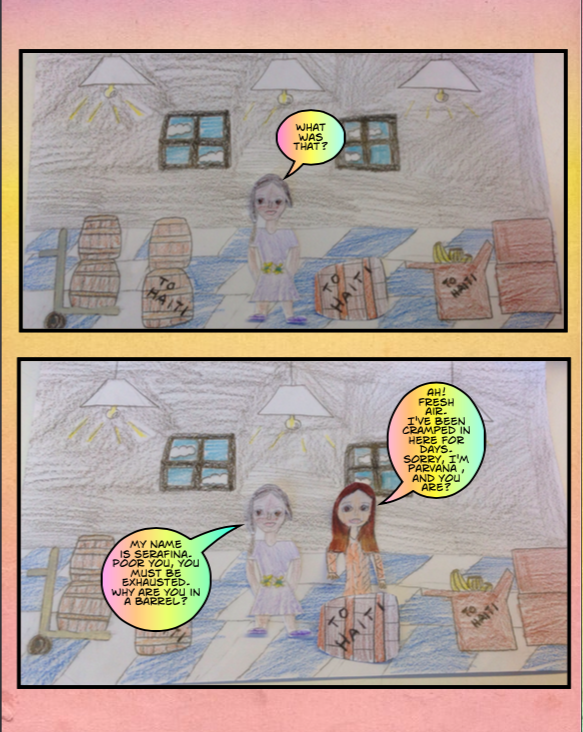 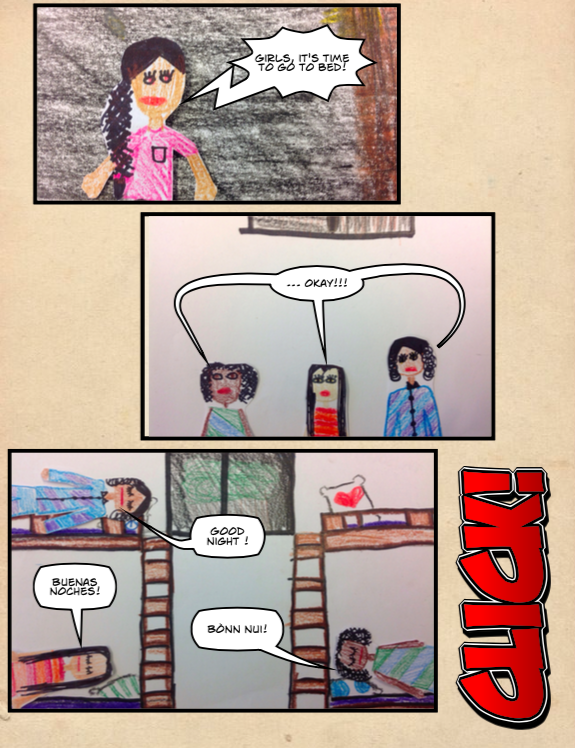 A few days after they published their comics, I asked my students to do a little reflective writing about the process of telling a story digitally. Below, some of their insights into how digital storytelling compares to more traditional forms of writing. I loved seeing them make connections between the two forms:

"The process of writing my comic was similar to a more traditional writing assignment because it still told a story. When I have written all of my other assignments they have all had to tell a story. It was different using Comic Life because I didn't have to include what the characters were doing and who was talking. The pictures did that for me."

"I liked how I still told a story with dialogue and characters, but I also got to use pictures to give a better idea about who was saying what to who and what the characters looked like. But, traditional writing gives me more imaginative freedom."

"The process of writing the comic was quite similar to traditional writing. I still had to edit, proofread, create a draft, and change the comic significantly from the beginning to the final draft."

"For both assignments I needed to tell a story. A traditional writing assignment is a story in paragraphs, and a comic is still the same story but broken down into small bits of dialogue. There still has to be a beginning, middle, and end. I still have to be creative. Some people might think a writing assignment is harder than a comic, that a comic is just random words put together to make a dialogue. But you need to dig deep and put yourself in the characters' shoes to have an actual comic."

Posted by Unknown at 8:39 PM No comments:

Last summer I blogged about my experiences exploring digital storytelling at a Bard IWT workshop. Many months later, I've finally had the opportunity to use some of the ideas generated from that workshop in my 5th Grade English classroom. Using ComicLife, my students are creating comics that feature the protagonists of some of the novels we've read so far this school year, and I feel absolutely giddy with excitement over the progress they've made in just a few class periods.

The first step of this project was to write scripts of conversations between 2-3 fictional characters (Esperanza from Esperanza Rising, Parvana from The Breadwinner, and Serafina from Serafina's Promise). As a class, we brainstormed various topics of conversation these characters might have (i.e. what are their shared experiences, where might they cross paths as young adults or even grown ups, what would their interests be) and then I gave my students time to plan out their settings, plots, and conversations.

Once first draft writing was complete, I asked students to pick two settings or backgrounds for their scripts, which they then drew on paper. In order to appeal to a variety of artistic sensibilities, I invited them to draw by hand, print images from the internet, or combine both mediums to create a collaged background. The results were stellar, and I've spent the past week walking around my classroom completely full of awe and excitement over this project. 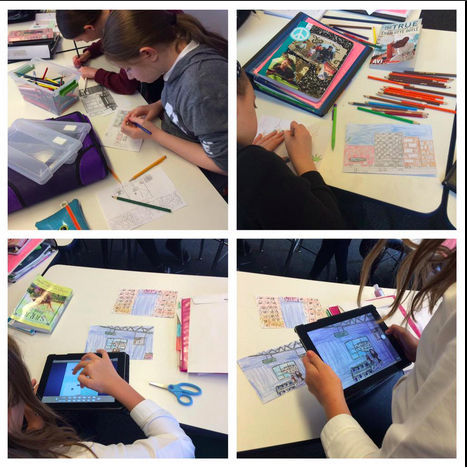 As students finished their backgrounds, their next step was to create characters to place in the scenes. We settled on referring to these characters as paper dolls, as they were static figures but could be enhanced with various accessories and expressions. The paper dolls could be as simple or elaborate as each student desired, and we had great fun exploring how easy it is to turn a basic stick figure into a character full of personality and attitude. 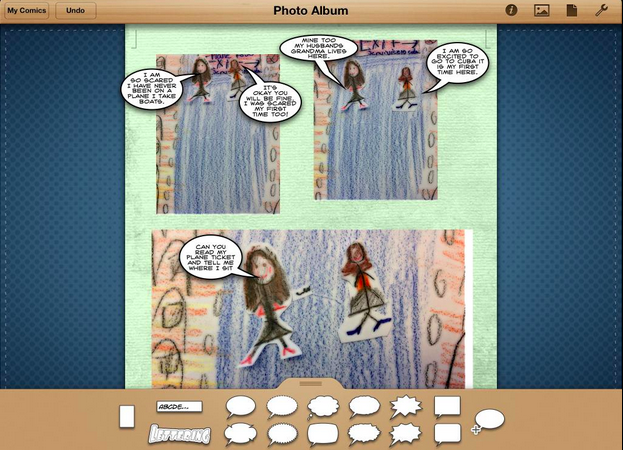 With scripts, settings, and characters ready to go, students then began using Comic Life, an absolutely incredible app available across multiple platforms. We worked on iPads, but I know from experience that Comic Life is just as user friendly on tablets as it is on the web interface. After I showed one of my sections a brief (extremely brief!) tutorial on how to use Comic Life, I decided that for the remaining sections I'd let them take a problem solving approach to the app. I demonstrated only how to create, name, and save a new file, then let my 5th Graders figure out how to change graphics and color schemes, resize frames and images, and play with photo filters. It was, of course, no surprise that they quickly became Comic Life experts, occasionally coming to me for more nuanced problems but primarily helping one another solve problems. 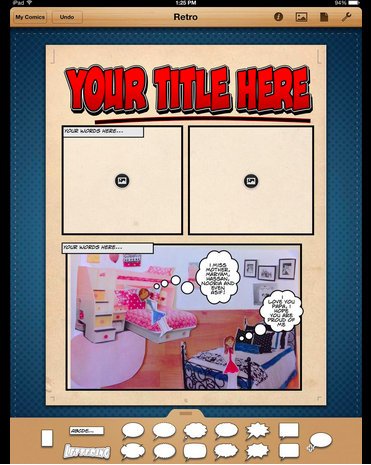 As they moved their characters through scenes and added speech bubbles to incorporate dialogue, students recognized that they were relying on some of the knowledge they gained during a previous stop-motion animation project to help plan out scenes and move their stories forward. I wondered if the connections between digital and traditional storytelling would also be apparent to my students, who frequently came to ask me if it was OK to change something from their original script in order to fit the parameters of this new medium. This proved to be an excellent opportunity for me to remind them that they make changes to their written work all the time, and we call that drafting, editing, or revising. Thought they're currently working in a digital format, they're still relying on the traditional writing process of collecting ideas, drafting a story, revising and editing that story, and ultimately publishing a final product.

Final comics should be completed next week, and I'll post some of them here then!